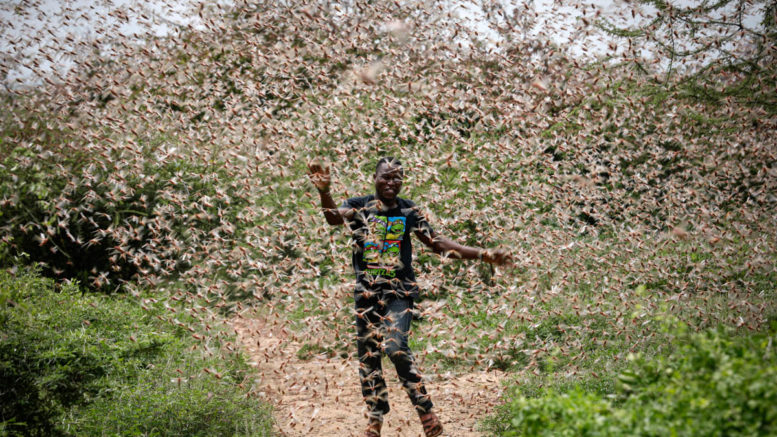 epaselect epa08158445 A local farmer Theophilus Mwendwa runs through a swarm of desert locusts to chase them away in the bush near Enziu, Kitui County, some 200km east of the capital Nairobi, Kenya, 24 January 2020. Large swarms of desert locusts have been invading Kenya for weeks, after having infested some 70 thousand hectares of land in Somalia which the United Nations Food and Agriculture Organisation (FAO) has termed the 'worst situation in 25 years' in the Horn of Africa. FAO cautioned that it poses an 'unprecedented threat' to food security and livelihoods in the region. EPA-EFE/DAI KUROKAWA

Nine Counties in the country are at a higher risk of invasion by the desert locust based on suitable climatic conditions and existing vegetation.

“This represents an unprecedented threat to food security and livelihoods because it coincides with the early beginning of the long rains and the current growing season”.

A new generation of breeding is underway in Kenya where more eggs will hatch and form hopper bands during May, followed by new swarms in late June and July, which coincides with the start of the harvest.

Desert locusts are known as one of the most voracious insects which can eat all type of vegetation that it comes across.

The centre said most of the young adult locusts have begun aggregating to swarms in invaded areas of southern, western and northern Ethiopia.

Rains intensified in April and favoured the crop season with plants in most crop areas now in early vegetative stages.

Locusts are predominately in non-crop areas, it said.

Currently, rangelands have had the most impact of the invasion with noticeable shrubs and woodlands biomass degraded by the locust.

It said the impacts of the locust invasion have been reported in woodlands and shrub lands in Kenya’s rangelands.

“Reduced pastures for browsers have been observed in Laikipia, Samburu, Baringo and Turkana,” it said.

It said climatic conditions suitable for the desert locust development are forecast to be highly suitable in South Sudan, southern parts of Sudan, western Ethiopia, coastal parts of Eritrea, and Djibouti.

“Ecological conditions (particularly the availability of green vegetation) are suitable in most of the region due to the high rainfall received necessary for vegetation regrowth,” it said.

The country with the most suitable conditions for invasion is South Sudan due to a combination of suitable climatic and ecological conditions.

Wind direction, which greatly determines swarm movement, is forecast to be generally south to the northeast in; Uganda, Rwanda, Burundi and Tanzania, leading to lowest risk of an invasion.

The forecasted wind direction in the northern sector is mostly towards the north and northeastern direction.

As a result, desert locusts are projected to move from south to northeastern areas of South Sudan; south to central, northern and eastern Ethiopia; and northern Ethiopia to southern Eritrea.

It said most of the hoppers reported in late March and April are now young adults and have been reported as swarms in parts of northern Kenya, Ethiopia Oromiya and SNNPR regions, Somalia’s Somaliland, and Sudan’s Agig and Alibai.